At the moment the phrase digitachism brings no results on Google from which I guess that it is a term unused before now. I have coined the word to describe artwork made digitally but in the spirit of Tachism. Digital Tachism.

“Tachism, French Tachisme, (from tache, “spot”), style of painting practiced [sic} in Paris after World War II and through the 1950s that, like its American equivalent, Action painting, featured the intuitive, spontaneous gesture of the artist’s brushstroke. Developed by the young painters Hans Hartung, Gérard Schneider, Pierre Soulages, Frans Wols, Chao Wu-chi (Zao Wu-ki), and Georges Mathieu, Tachism was part of a larger French postwar movement known as Art Informel, which abandoned geometric abstraction in favour of a more intuitive form of expression. Art Informel was inspired by the instinctive, personal approach of contemporary American Abstract Expressionism, of which Action painting was one aspect.”

“Like their American counterparts, the French-educated Tachists worked with a loaded brush, producing large works of sweeping brushstrokes and of drips, blots, stains, and splashes of colour. Their works, however, are more elegant and lyrical—often including graceful lines and blended, muted colours—than the works of such American painters as Jackson Pollock and Willem de Kooning, on whom the French artists modeled themselves. The Tachists were also less indebted than were the Action painters to uninhibited psychic inspiration.”
The Editors of Encyclopædia Britannica

When processing and layering images with blending modes and effects I am aiming for the unconscious, intuitive, spontaneous and instinctive in decision making. Serendipity born of technology and a poetic response.

The Antithesis series is my first work in this method. 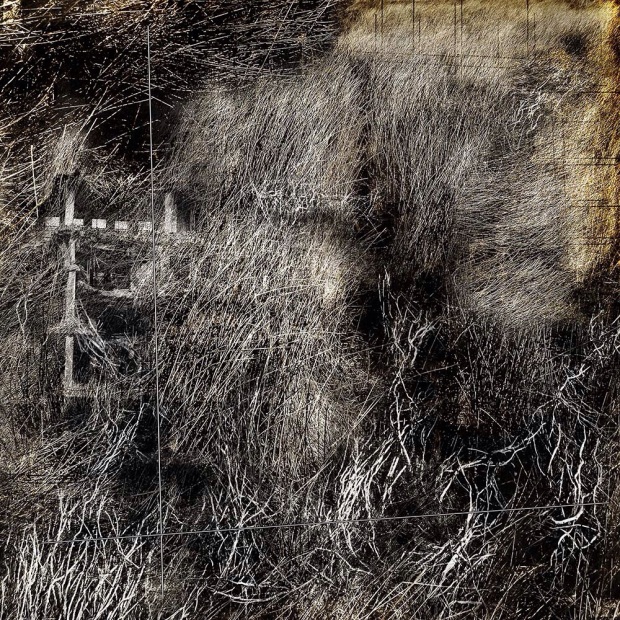 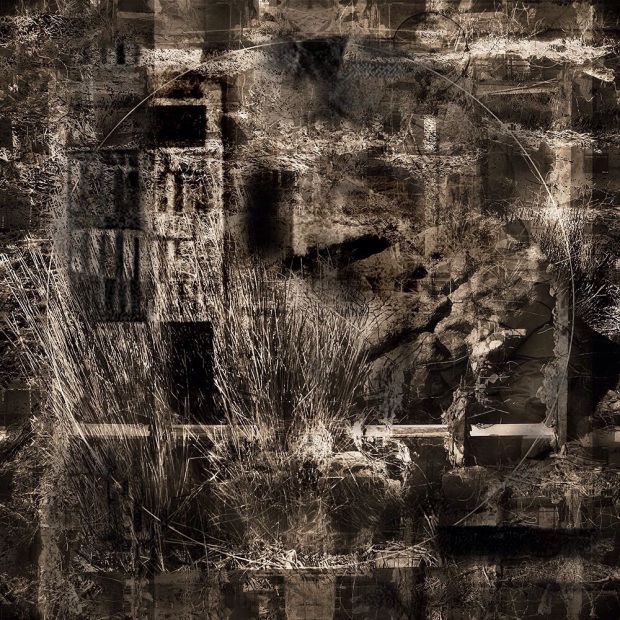 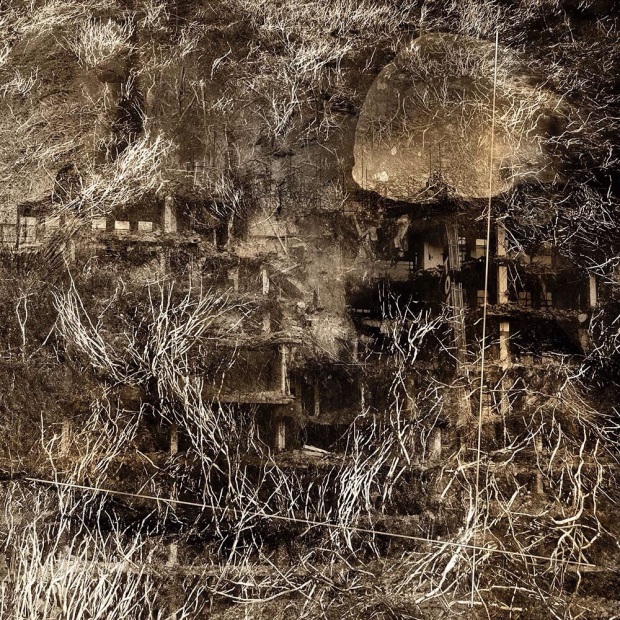 Again inspired by nature and infinity this series celebrates the magical aspects of the world around us. 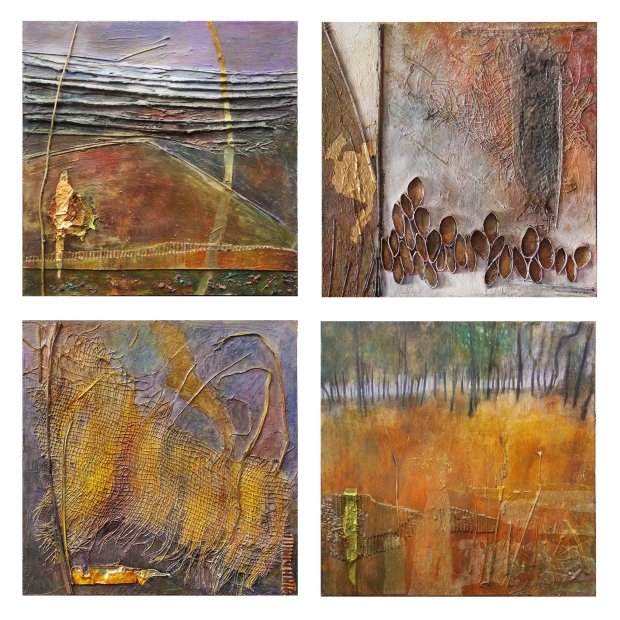 The third image in a series of Enchanted Spaces. Two ideas collided here.

I was seeing the image as a poetic visualisation of ‘The Field of the Cloth of Gold’, evocative and romantic words reaching beyond the Tudor history. These visualised perhaps as a banner above glinting armour with an earthy ground. The hearaldry of a mythic pomp and circumstance.

Learning of ‘phase transition’ via a radio discussion it (the image) seemed also to depict the description given by the physicist to explain this phenomenon. The edges where properties of matter change in different conditions were described as a volatile mix of structure and space.
So the golden cloth is at some level in a flux with more or less stable edges.
Within within.

Acrylic paint and medium on cement with mixed media and embedded materials.
20″ x 20″ 2014

Acrylic and mixed media with embedded organic materials in cement on canvas.
20″ x 20″ 2014

“If the doors of perception were cleansed every thing would appear to man as it is, Infinite. For man has closed himself up, till he sees all things thro’ narrow chinks of his cavern.”
― William Blake, The Marriage of Heaven and Hell

“The unexplainable thing in nature that makes me feel the world is big fat beyond my understanding – to understand maybe by trying to put it into form. To find the feeling of infinity on the horizon line or just over the next hill.”
― Georgia O’Keeffe, Some Memories of Drawings 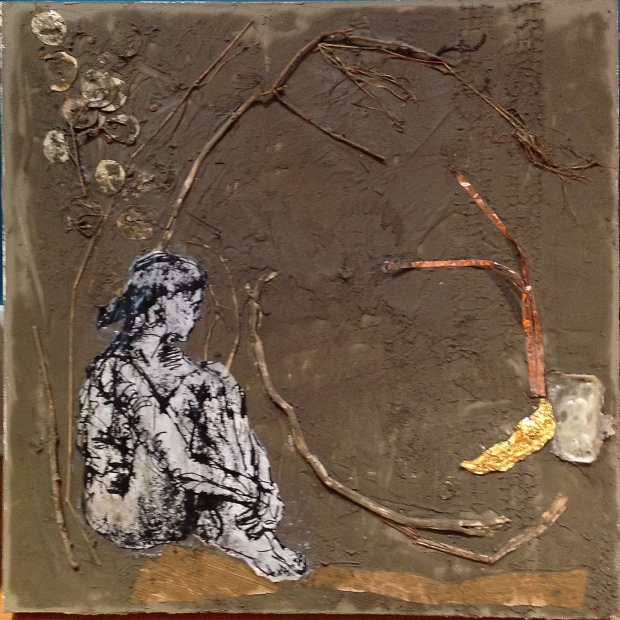 Cement, mixed media and collage on canvas
20″ x 20″
Genesis is an allegory. It describes the transition of the human race from a state of innocence…. They were initially unaware of their own mortality; they had little or no concept of right and wrong. After the transition they had a moral sense. They realized that their life on earth was finite.
religioustolerance.org 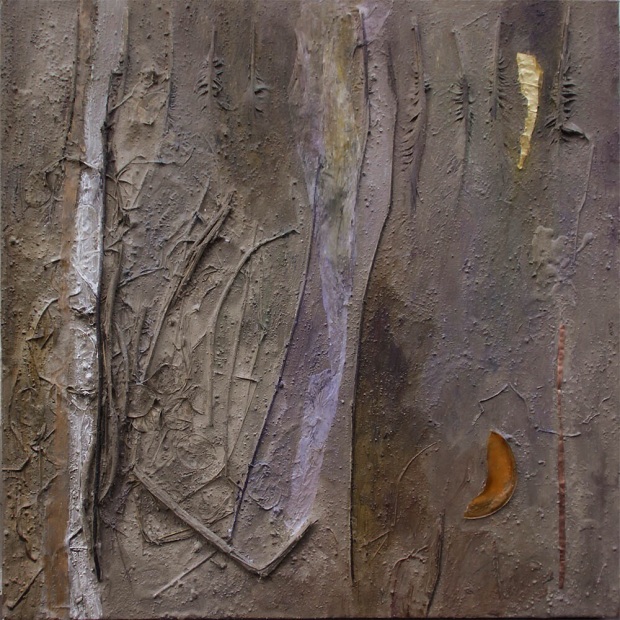 A look back to this from 1990 to help move current work forward.
Pastel and collage A2 on paper. 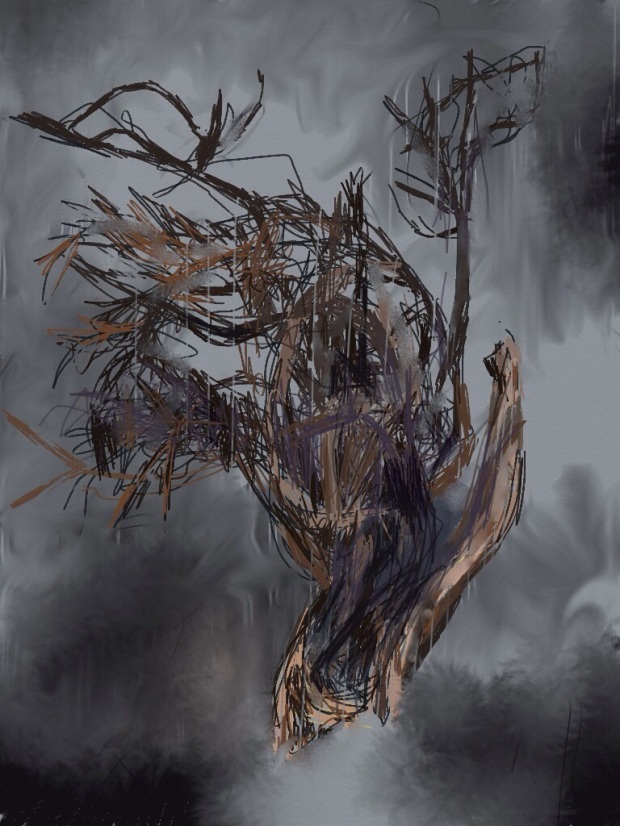 Acrylic with mixed media on canvas 8″ sq in progress